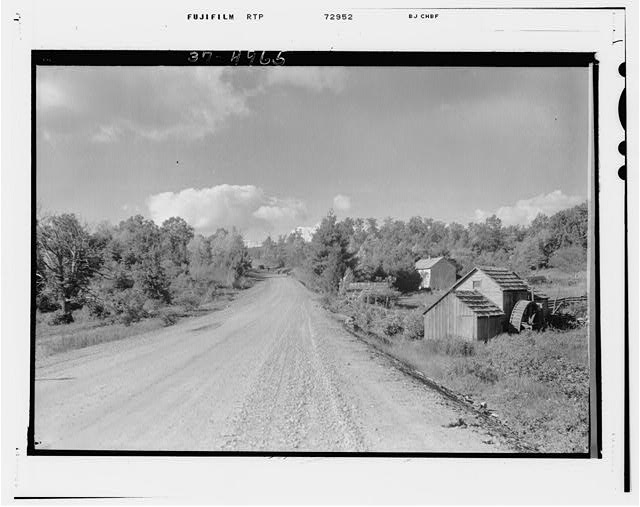 One of the only functioning mills in Floyd County, Mabry Mill , is located at milepost 176.2 on the Blue Ridge Parkway. Edwin “Ed” Mabry and his wife, Elizabeth “Lizzie” Mabry, moved to the property in 1899 and farmed the land for a couple of years, before Ed moved off of the property to work as a blacksmith. Mabry returned to the property around 1903 and began the site’s long history of construction.  By 1908, Mabry had completed the gristmill.  The blacksmith shop, sawmill, and woodworking shop were added in 1910, 1915, and 1916 respectively.  Around 1915, Mabry built a house on the property using lumber from the mill. Fifteen years later, however, Mabry had become an invalid and had to install two kerosene engines in order to keep the gristmill running.  He died in 1936 and in 1938, Lizzie Mabry sold the property to the Virginia State Highway Commission.

After their acquisition of the property, the National Park Service had to decide what to keep from the property.  Despite recommendations from Stanley Abbott, the Mabry House  as well as other dilapidated buildings on the property were razed to the ground in 1942.

In that same year, the National Park Service began restorations [link to Restoration of Mabry Mill] on the mill as well as the blacksmith shop, and in 1944, they handed over the running of the mill to National Park Concessions, Inc.  A craft and coffee shop was built on the site in 1956, and shortly thereafter the Mathew’s Cabin was brought to the property. In 1957, a cane mill or sorghum press, a mint still, a lumber drying rack, and a bark mill from Rocky Knob were installed on the grounds as well.

In this case, the construction was not simply physical, but narrative as well.  Mabry Mill became an example in the Blue Ridge Parkway’s Pioneer Interpretation Plan .  This plan was meant to preserve the “pioneer culture” of the Appalachian region.  In 1941, a report published by the National Park Service argued that every care should be taken in keeping “the spirit of mountain culture alive.”

The National Park Service built split rail fences along the side of the highway and selectively retained and reconstructed buildings and structures that fit into their narrative.  This, of course, also meant that they purposefully excluded or razed any structures that did not, including the Mabry House.  In other words, the National Park Service changed the landscape of this site in order to suit the story it wanted to tell, regardless of whether that story was true, and to this day, Mabry Mill retains the “pioneer” interpretation given to it in the 1950s.

From the time the Mabry’s purchased the land in the early twentieth century to the present day, Mabry Mill has been a site of physical and narrative construction, twisted and turned in order to tell whatever story the owners considered most important: whether that story was commercial or commemorative.

For more information about the interpretation of Mabry Mill by the National Park Service, see this oral history with Park Service employee, Philip Noblitt.

The Built Environment of Mabry Mill Mabry Mill, as constructed by the National Parks Service, consists of two distinct areas. The main area, for which the site is named, features a constellation of turn-of-the-century buildings including Ed Mabry’s actual mill , a black smith shop  and the Matthews Cabin , which features a working loom. Designed as an outdoor museum depicting “mountain industry,” this area encourages visitors to stroll through the premises for building to building to experience rural Appalachian life in the early 1900s. Following a series of clearly delineated paths and wooden bridges, visitors become immersed in an environment that is constructed as both historical and picturesque. Though Mabry Mill lacks a proper vista so central to the public’s conception of the Blue Ridge Parkway, the site features many scenic angles at which to view the mill and its signature reflecting pond. In between taking in the site’s constructed beauty from the variety of vantage points offered by Mabry Mill’s landscape design, visitors can engage with park service employees stationed at the different buildings about the different types of early 20th century mountain industry. Although both the outdoor museum and the restaurant and craft store occupy a relatively small plot of land, the two areas are zoned in a manner that they do not compromise the intended effect of the other. In this way, the experience of Mabry Mill is optimized by approaching the site from the south and parking in the main lot in front of the restaurant. From there, visitors can are guided via a path and introductory signage, into “rural Appalachian life” at the turn of the 20th century. The path has visitors round a subtle bend that obscures the line-of-site to the restaurant to their south, immersing them in this imagined and instructive world of “mountain culture.” Of course, this division is not perfect. The parking lot is still in view from most angles around the Mabry Mill building, and the sound and sight of passing cars on the parkway, not to mention official Blue Ridge Parkway signage, are constant reminders that one has not actually time-travelled back to 1906, but the immersion effect of the site is still very much achieved.

The Social Impact of Mabry Mill

In addition to the water-powered grist mill, Mabry Mill was home to a well-equipped blacksmith shop, as well as a large textile station in the Matthews cabin. As well as grinding raw grain into flour, the mill offered further services to the locals of Floyd county, namely farm equipment repair and both the manufacturing and repair of clothing for local persons. The mill’s location, and by extension the surrounding community were far from an established town, making the mill a formidable asset to the residents of Floyd county, as the closest town in which one could find comparable services so close to one another was more than a day’s journey away.

Though isolated, the mill was constructed right next to what was was to become the Blue Ridge Parkway.The mill’s location made it extremely accessible to the local community, which in turn made the mill site a highly social area. However, when the mill fell into disrepair due to Ed Mabry’s failing health and Elizabeth’s inability to run the mill, the traffic to the mill must have faltered, even coming to a halt at some point.

Staking its claim to a prime location in terms of public accessibility, the National Parks Service took notice of  Mabry Mill’s possession all of the key components to promote tourism along the recently opened Blue Ridge Parkway: its proximity to the parkway, scenic beauty, and, most importantly, an existing historic foundation that begets a narrative on which to build.

The mill began seeing visitors and tourists in the 1950s in large quantities. Even though the mill had been closed for more than a decade, tourism was high in the late ‘50s, and the deep community roots were still present, and are reflected by its visitor pool.

The site visit allowed a view of the mill from an outside perspective, as someone whose life was in no way influenced by the mill, and the idea of the community, or neighborhood museum resonated with the visit. The site felt like a model walkthrough of the way of life seventy-plus years prior, yet not forgotten in the past. The family, community element was still present, though now more geared towards the scenic and monetary tourism propagated by the site’s natural beauty, and the added restaurant and gift shop. Even now, almost three-quarters of a century after the restoration project, the mill is still relative to the community, albeit from a different angle.

The site visit also affirmed that many of the visitors were further on in years, and many of the visiting parties seemed to be family oriented–that is, adults, a child here and there, and many, many grandparents. Moreover, nearly all of the parked cars sported Virginia license plates, many of them adorned with the bumper stickers of local high schools and organizations. While it was pleasing to see the social, neighborhood dynamic still at work, the age of the majority of the site visitors did concern me for the mill’s future. The number of elderly persons at the site was severely disproportionate to the number of younger adults and children present. My main thought touring the site was whether or not the significance of the mill would survive down to younger generations with so few current young representatives.

222. View of the Mabry Grist and Saw Mill before the NPS Dredged the Pond and Razed the Mabry House in 1947, Replacing It with the Matthews Cabin in 1956-57. – Blue Ridge Parkway, Between Shenandoah National Park & Great Smoky Mountains, Asheville, Buncombe County, NC. Photograph, 4in x 5in, 1947. http://www.loc.gov/pictures/collection/hh/item/nc0478.photos.345922p/.